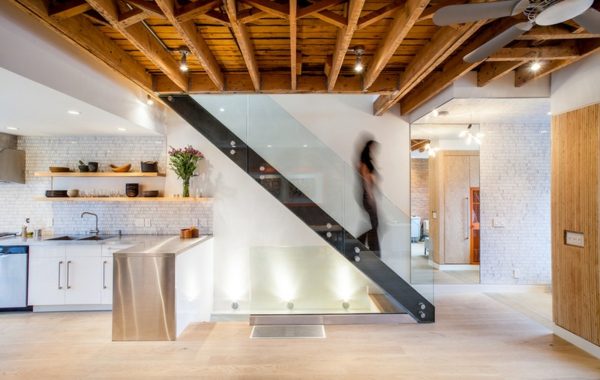 I have seen many pictures of how humans and animals make the pictures more alive. This included, among others, such as this below. There a woman comes down the stairs. When I saw it, I thought, ” Modern wooden stairs are static constructions that imply movement.

Adding people to them makes the movement palpable. “Mostly, then, the person looks like a blurry figure. Which method of looking at modern staircases can be better than looking at people climbing up and down.

Here I would like another advantage of including people on the pictures of the stairs. We spend most of our lives inside. As a result, the stairs should be seen as elements that people want to cross. So you should not be seen as an obstacle to the good life.

Design plays an important role in this context. Starting with the correct climb ratio, the materials and the way a staircase inscribes into the interior design.

Due to these considerations and the contemporary context, such stairs are open and represent an integrated part of the adjoining rooms.

On our website you will find many pictures with people like this one. Thus, various properties are illustrated. By that we mean the angle, the materials, the permeability. People give us an idea of ​​the scale and guide our eyes in a certain direction. Let’s follow the descending woman! It is located on a staircase with glass railings and reaches over this the kitchen. From there it can reach a low level again.

The guardrails are actually a structural element. They support the steps and this has been made possible by advances in technology in glass work. 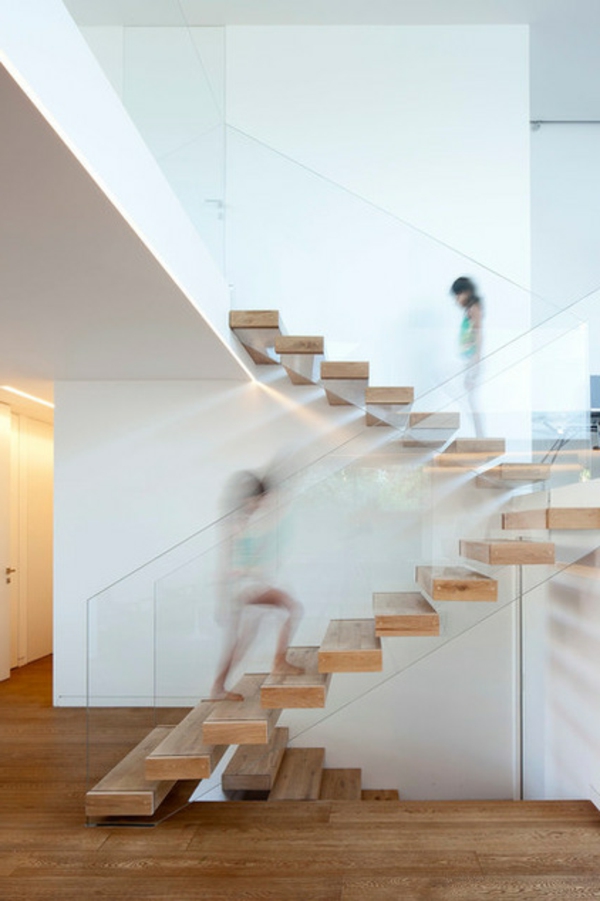 Note how the tread exceeds the glass in the foreground. Look at the stairs again and especially look at this detail up close. Then you would notice that the landing serves as both an office and a library.

Permeability can also be obtained by a completely white wall

That’s the case with this straight-run staircase. Compare the angles at this and the previous stairs. I think the leg muscles have it easier in the second case! 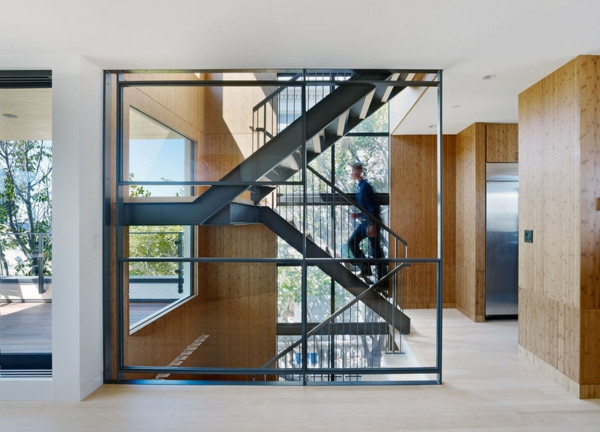 An alternative is to see a transparent area like this, which still allows sunlight to get through. Various figures descend the stairs. She reaches a marble landing above the wooden floor.

In this case, the transparent and solid aspect has been unified in a playful way

Thus, the figure, which is located in the middle of the stairwell, wins the entire attention.

Solid and translucent aspects also mix at this staircase 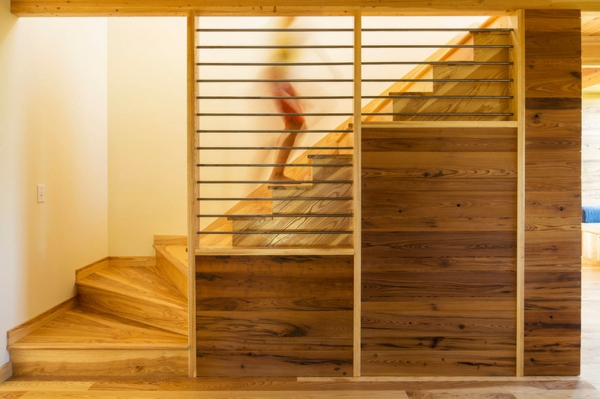 In this case we are dealing with wood and horizontal rails. That would be an alternative to the use of glass and other solid surfaces such as railings. 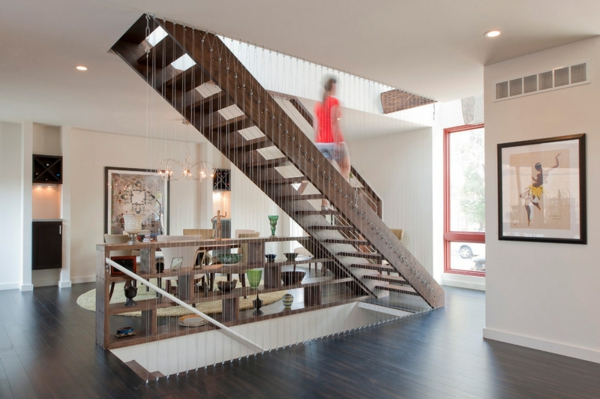 Moreover, they are often preferred in terms of safety regulations. They were stretched over hoes on the floor and on the ceiling. They were caught on eyelets, which were attached to the stair stringers. Thus one reaches the full height of the guardrails and the texture of the diagonals. In this way you deviate from the straight verticals. 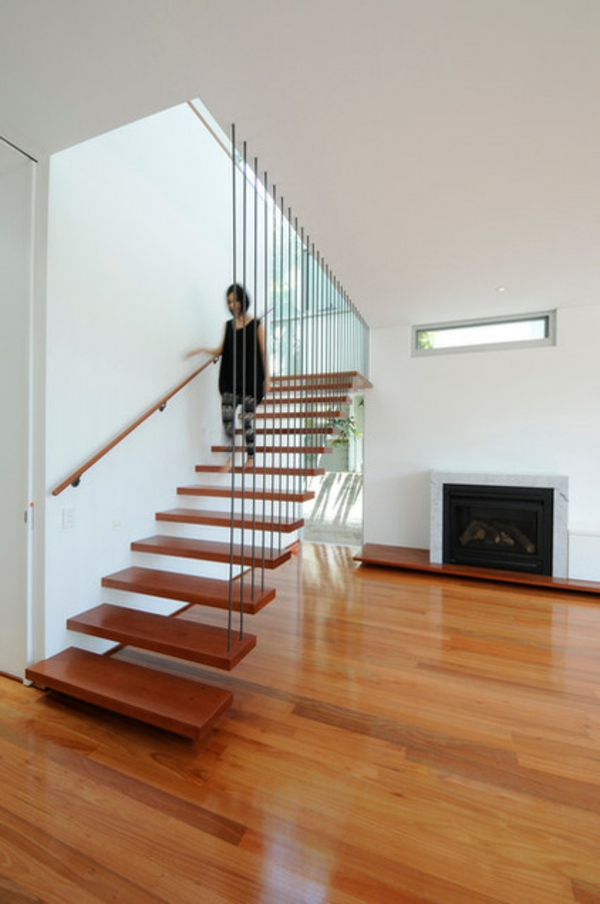 The stairs here have a metal fight, which is stretched and supported at the four corners

Take a look at how thin the profiles are that easily cross the stringers. 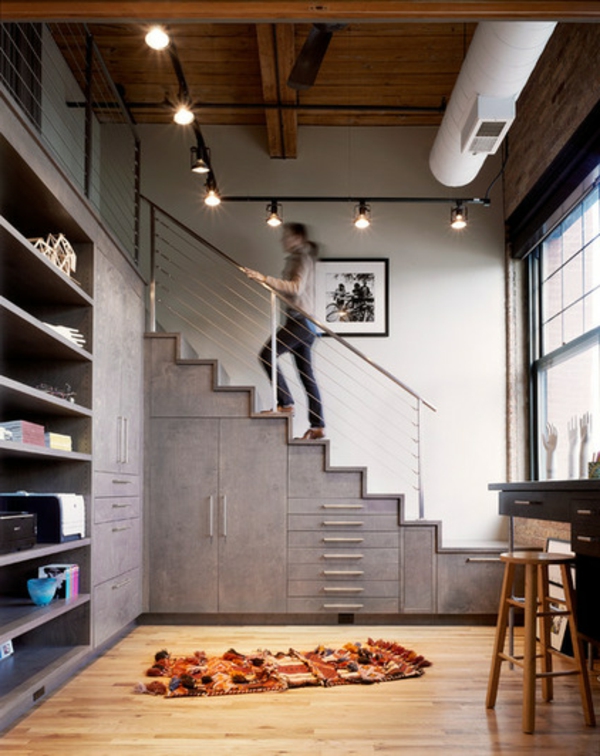 This picture shows us how to use every square meter and how to integrate the appearance of this storage area into the rest of the house. The only thing that seems a bit impractical to me is the too high first level. 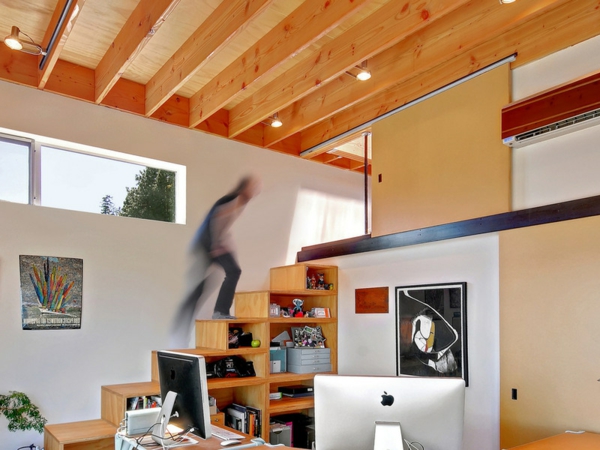 Many urban apartments in the attic follow the example of before. This staircase is technically a bookshelf. It is certainly not proper, because the opening to the ceiling exit, to which the person looks, is much too low. 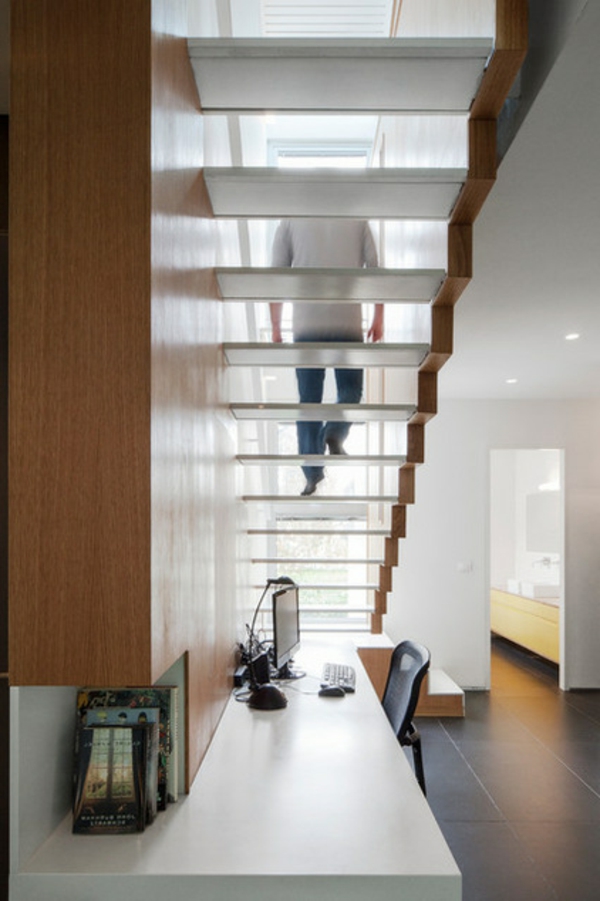 This also makes sense, because stairs are often the only house structures that extend over a double height. This and other pictures with a person on it bring the transparent character of these constructions to strong advantage. The example here shows that everything that happens underneath should not be considered. 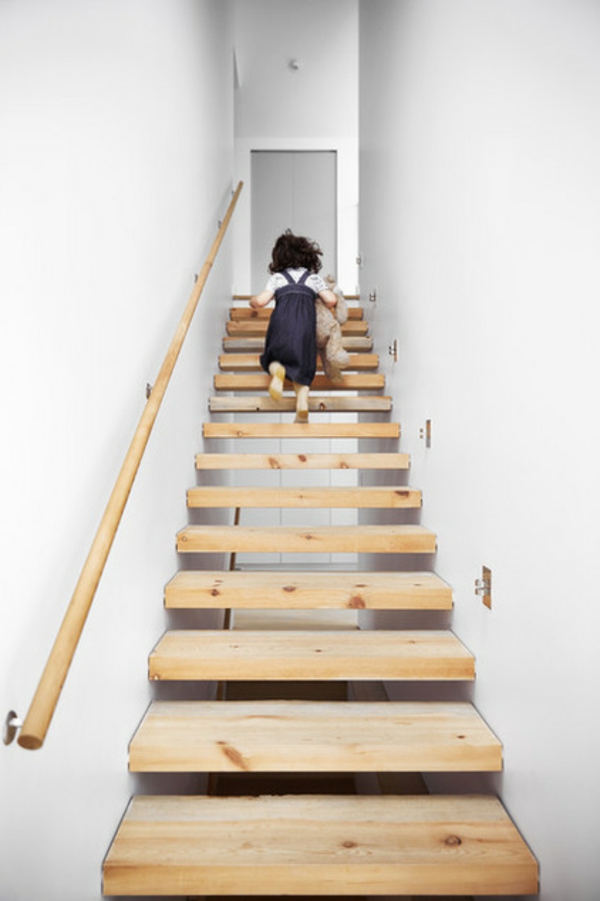 The previous example is much more open than this one. It is obvious what is better for people with young children. 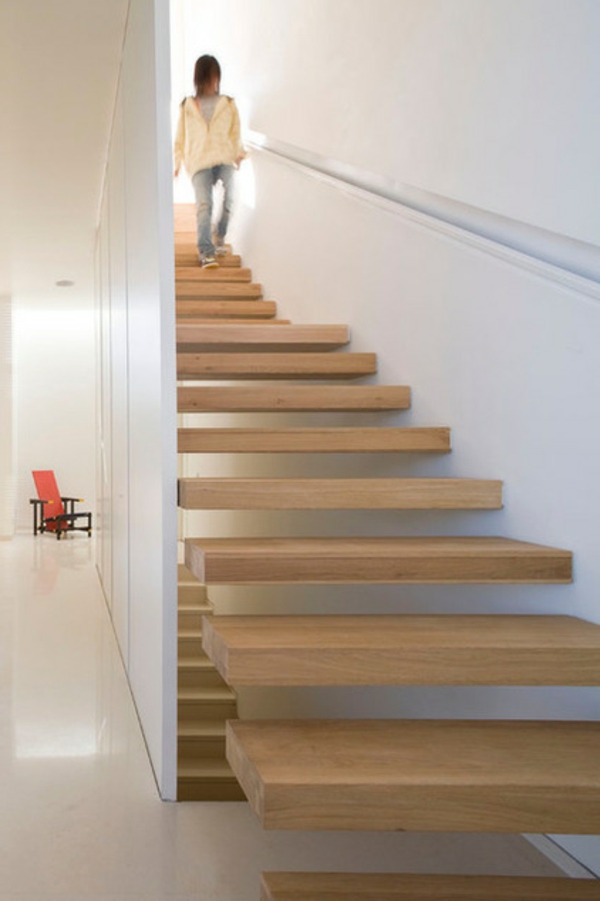 This can be seen on the basis of this and the picture here. However, how to make the staircase in details is a very critical issue with this type of staircase. An alternative to mounting on railings is cutting into the walls. Thus, one will bring the minimalist appearance to advantage here. By the way, the railings are no guarantee that someone will use them. 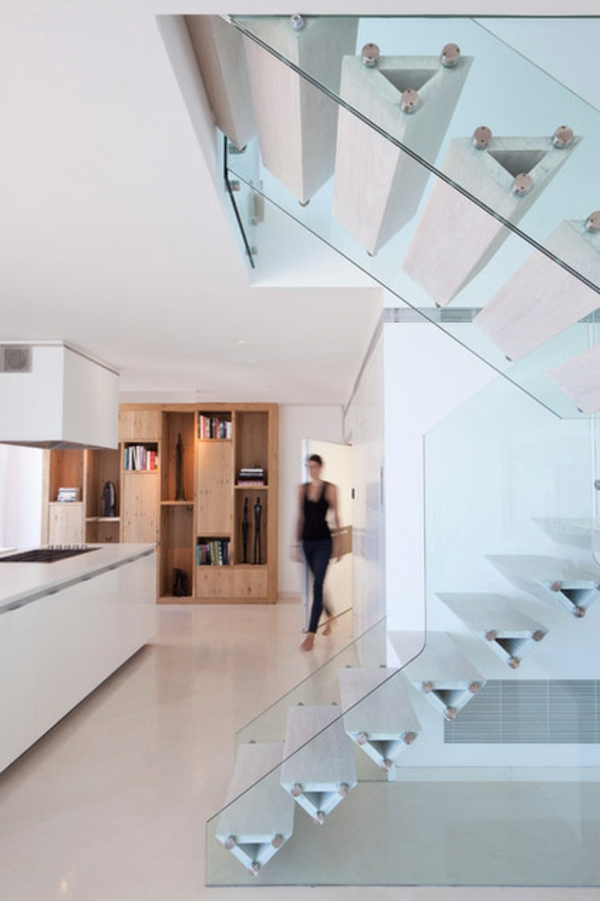 Both are the work of one and the same architect. Here we see a woman approaching the stairs.

Seen from above, the stairs look very solid 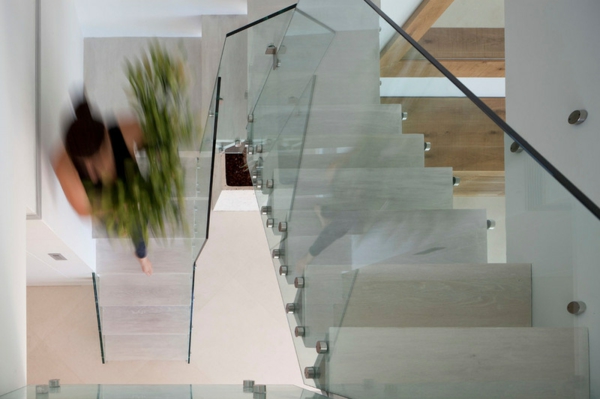 It shows an unconventional and spiral shape. It also consists of filthy fragments and cuts into the glass railings.

Turning is a bit insecure and questionable, it makes running on the stairs a physical and psychological test 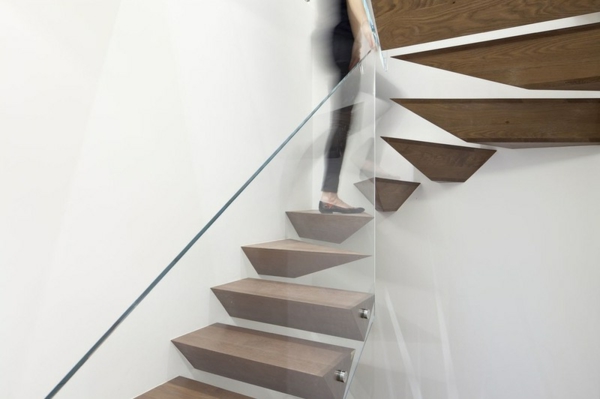